Fortunately fish do not follow fashions or fads and while many of the latest offerings can win you a bite there is still firmly a place for bread, indeed post Christmas up to the end of the coarse season on running water there are few finer baits for a big roach or chub, especially if there is a tinge of colour to the river.  A pinch of flake under a float is a deadly technique that shouldn’t be discounted but for this article let’s explore its potential on the bottom and how I used it on a recent session.

Both the air and water temperature was cool but on the plus side it had remained stable for the last couple of days.  A lack of rain had also see the river’s pace reduce and while a little colour remained, it was no longer angry.  A perfect day to fish the quiver tip especially if I could find the correct balance with the equipment – allow me to explain.  My preference when targeting big fish is to use a glass tip, which slows the bite down and importantly reduces resistance for a taking fish.  This however only works when a tip of 2ozs or less can be used as past this point a chub or roach will feel something is wrong and drop the bait on most occasions.  In other words you will be fishing ineffectively but there are a lot of scenarios where the flow dictates a tip of more than a couple of ounces as I was faced with today. 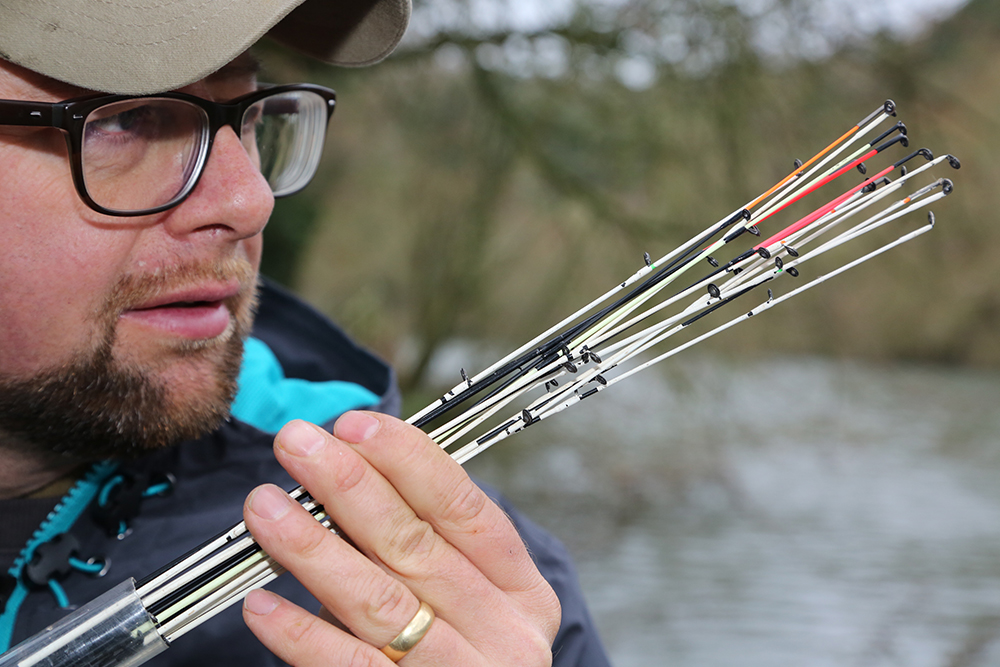 Where possible I always fish close to reduce drag on the tip but the snag I needed to target was 30 yards away on the far bank of the river.  Fishing in a standard manner would be useless so I started by swapping over to a 3oz carbon tip on my Drennan medium feeder rod.  The reason for this is that I would be fishing for drop back bites casting slightly upstream and allowing a big bow of line to form.  If this was used in conjunction with a weight only just heavy enough to hold bottom the fish would take the bait positively, something it would never do if I fished downstream to it with the rod top cranked over.  Due to the frequency of casting and the distance involved a rather robust 8lb method feeder mono was selected.  The terminal tackle started with a running paternoster boom followed by a grippa stop to prevent it pushing over the 8 inch twiddled section and loop at the end of the 8lb line.  This was then used to connect the hooklength of a size 12 Drennan wide gape pattern to 5lb monofilament.  Completing the rig was feeder selection and with liquidised bread being the free food a cage or open-end version seemed the obvious choice.  Maybe surprisingly then it was neither as I firmly believe that in strong flows the bread escapes before the rig is settled on the bottom.  To overcome this I take a Kamasan black cap feeder and cut an L shaped section out of the back of the body.  By creating an open/block end feeder combo I can then be certain the bread is being fed into the correct zone. 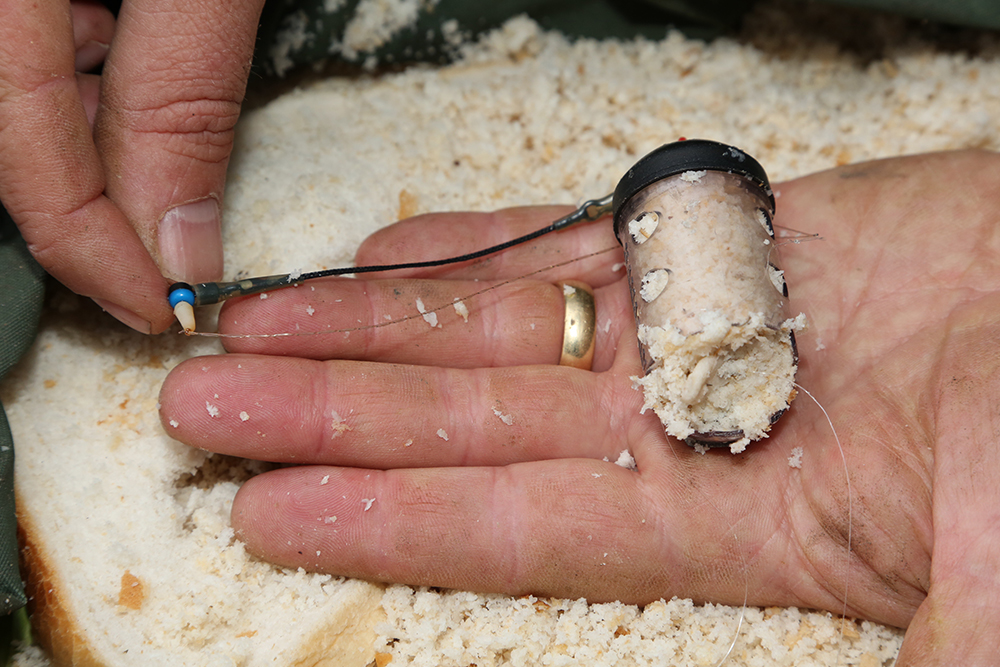 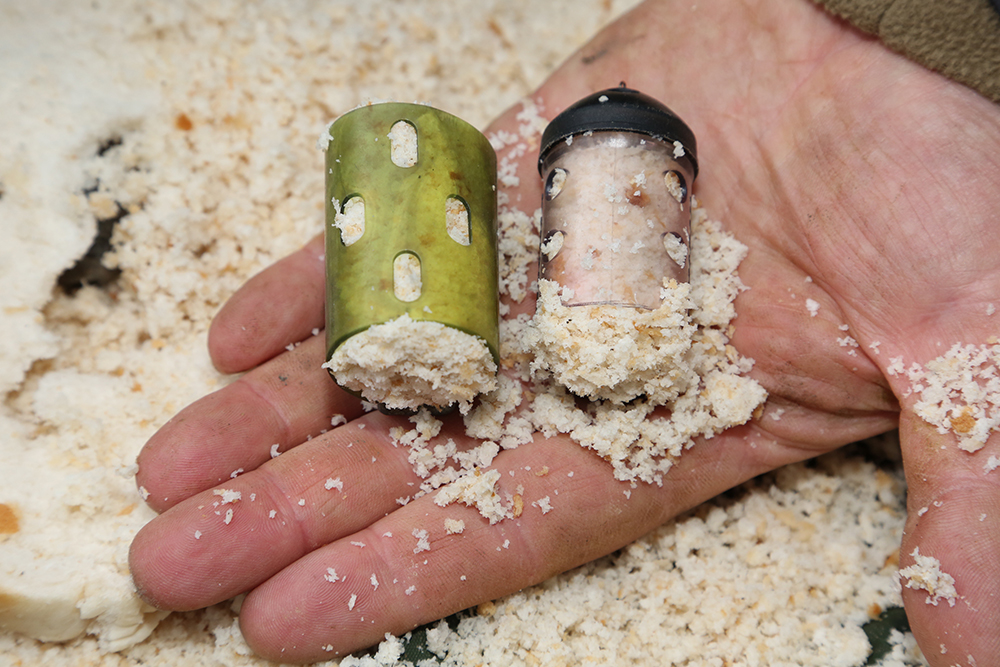 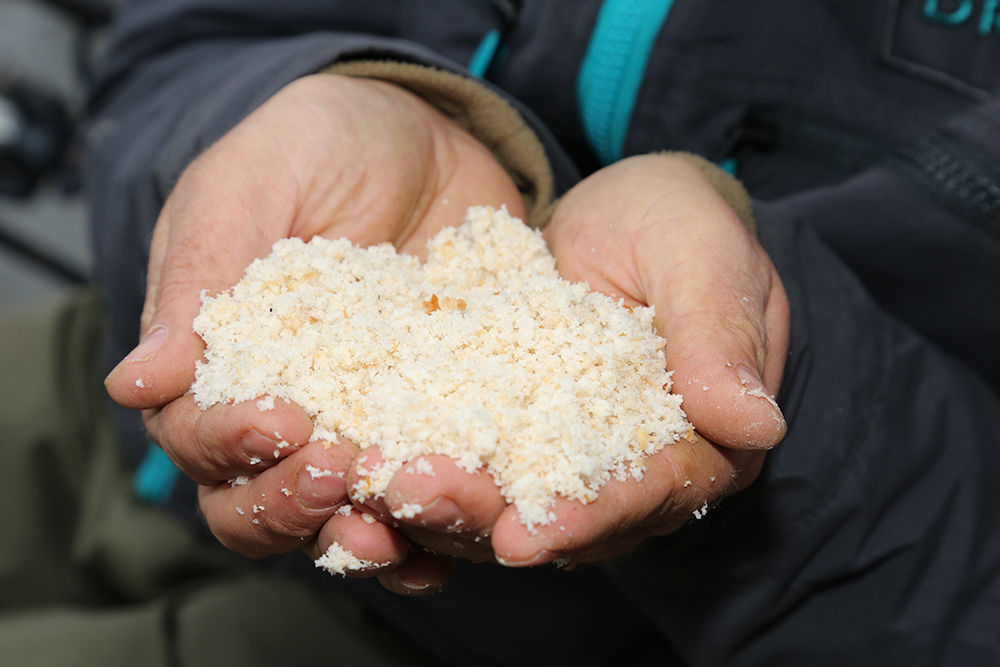 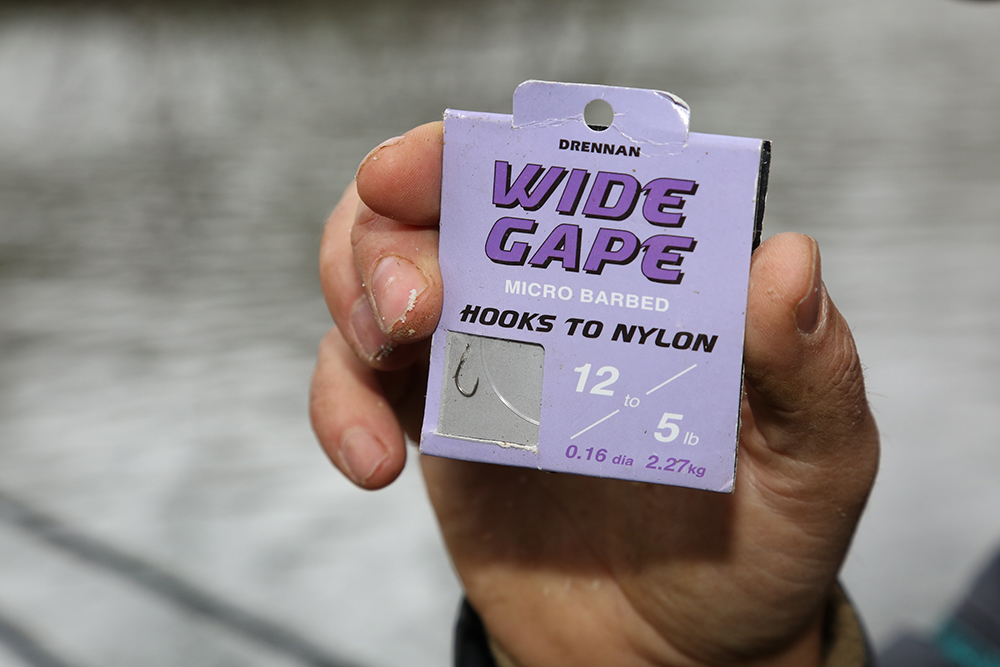 With rig preparations completed I then needed a few casts to the far bank snag firstly to guarantee pinpoint accuracy because once I was clipping the woodwork I marked the length of line cast with power gum.  This could then be placed into the spool clip to guarantee every cast was exactly the same distance.  Concentrating not spreading the feed would be key on a cold day.  I also needed to select a feeder that would only just hold station and settle on 30gms to achieve this.

Ready to fish I emptied a bag of liquidised bread into a bowl.  This was 2 loaves that had been left exposed for a day before being blitzed in a food processor.  Match anglers would have removed the crusts but with a big fish or bust mentality I didn’t mind their inclusion and being slightly lighter they would increase the draw from downstream.  Scooping the feeder into the mix I compressed it firmly inside. For hookbait I had 2 choices; a pinch of flake the size of a 20p coin gently squeezed around the shank leaving the rest fluffy or punched bread, which had been prepared the night before.  Half a dozen slices had had their crusts removed and microwaved for 20 seconds; I then compressed the bread with a rolling pin before individually wrapping them in Clingfilm.  Today I chose to begin with punch and pressed a Drennan flake tool into the bread before passing the hook through it twice.  Many anglers struggle with bread convinced that it has fallen off especially when casting at range.  I, however, had a trick up my sleeve – gently pushing the hook into the liquidised bread that bulged out of the feeder.  Hard enough to stay in place during the cast but able to release and fall freely as the black cap fell through the water column. 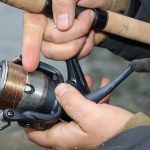 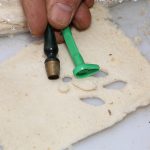 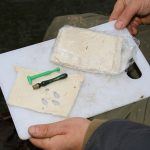 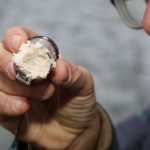 My level of preparation and attention to detail can seem laborious at times but is rarely not rewarded.  It also affords me the mind-set that I couldn’t be fishing any better and confidence is key to catching specimens.  So I made the first cast knowing a bite would come and indeed it did after a dozen more casts laying a carpet of bread down. The river suddenly lost its grasp on the tip as a chub sprung the trap and the feeder swept downstream.  The carbon tip made it impossible to miss the drop back and I struck into the first of many such bites over the next 6 hours.

Fishing can be both simple and effective so give bread a go before the season ends. 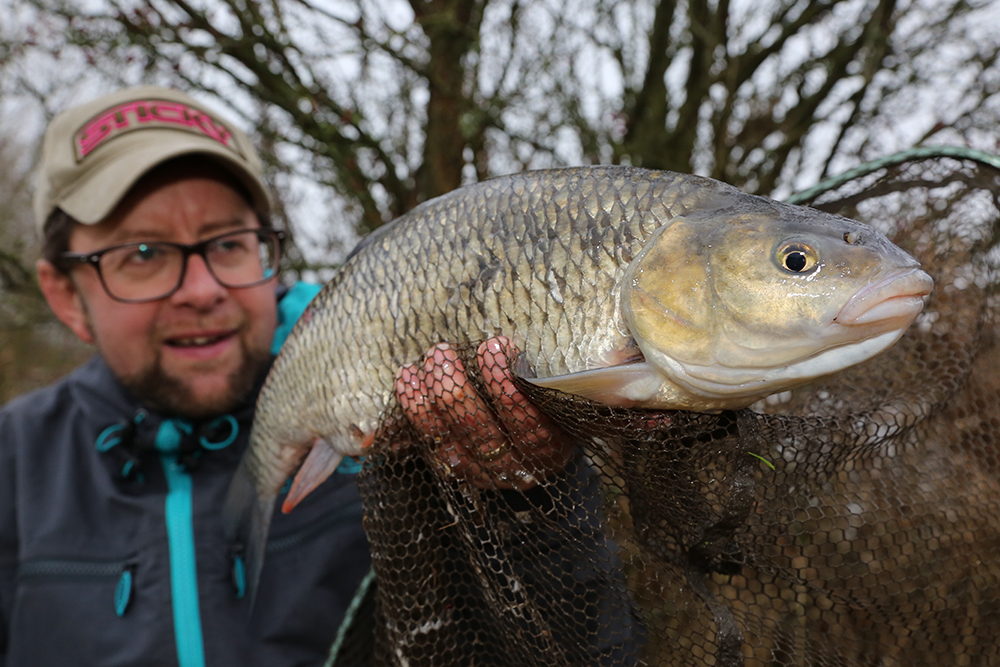