Drennan’s Jack Griffiths talks us through the recent White Acres festival which saw him finish 6th out of 90 anglers and meant he gained the bragging rights in the office!

As White Acres Fisheries was a new venue for me I was lucky enough to get there a few days before the festival so I could get a feel for the fishery and work out how to approach each lake. One thing I did pick up very quickly from the practice days was that you needed to keep feeding consistently with either maggots or small golf sized balls of groundbait to ensure bait was falling through the waters layers throughout the day and keep the fish interested. After catching 3 or 4 F1s they would back off the feed so instead of chasing them out of the peg it was far better to switch lines whilst continuing to feed all lines to gain their confidence again ready for the next switch.

On day 1 I drew peg 20 on Pollawyn which is a match lake of 53 pegs and one of the oldest lakes on the fishery. I decided to set up 2 pole lines at 5m and 13m. The 5m line meant I could comfortably feed maggots by hand throughout the day whilst my 13m line was fed with groundbait and maggots through a cad pot. I also set up a waggler line which was fished just past my pole line at roughly 16m knowing that some fish could be caught on corn late on in the match. I lost my first 3 fish due to them being foul hook but quickly managed to work out that the fish were sitting roughly 4” off the bottom. I managed a catch a few F1s off this line but shortly after the fishing slowed up. I then decided to give the waggler line a go but with the wind hacking through the swim it was hard to get the right presentation that was required so I had to refocus my efforts onto my 2 pole lines. Thankfully there was a few small F1s and skimmers on the short line which helped me put together a total of 28lb in the net which was enough for 3rd in the section. 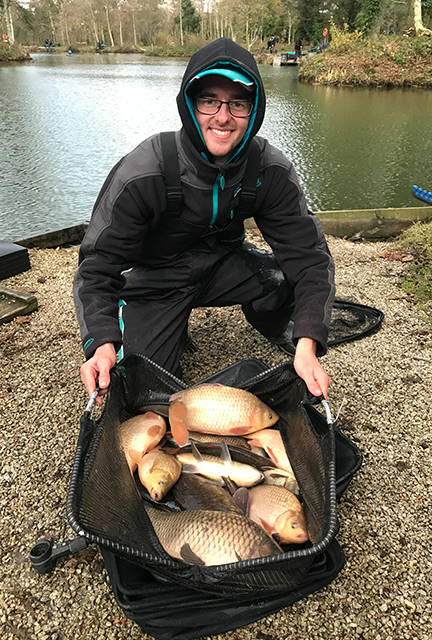 Day 2 I drew peg 14 on Canal Lake which is a small 20 peg lake but meant I was bang in the middle of our section. I set up 3 pole lines which was 11m straight in front then a 13m to my left and 13m to my right. Each of these lines were fed with a pinch of maggots and a small nugget of groundbait. I rotated between these lines throughout the day when bites started to dry up, the 11m line was by far the most productive for me on the day. I managed to put 21 F1s along with a few roach for a total weight of 48lb and meant I had won the section by just under 1lb. 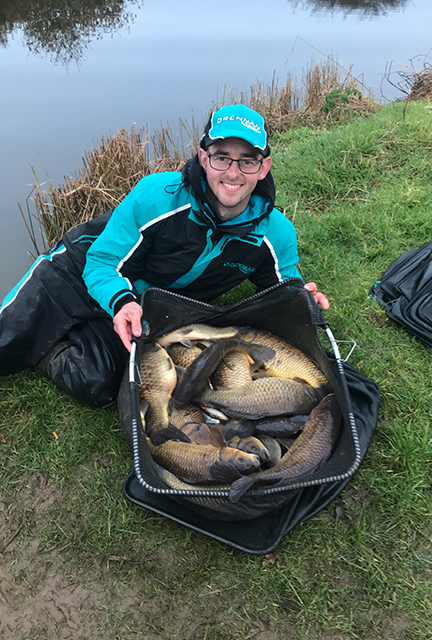 Day 3 saw me draw peg 12 on Twin Oaks which was a nice end peg. Twin Oaks is quite a wide lake and has 36 pegs available which meant the pegs drawn were quite spaced out. I knew I needed to make the most out of the swim as my weight on the previous 2 days had only totalled around 76lb and with a few anglers on the same points tally as me I needed to gain an advantage on the weight count. I set up a 13m line which was fed with groundbait and maggots along with 2 side lines along each edge at around 5m which I would be feeding with a pinch of maggots every 30 seconds or so. I started on my long line but couldn’t get a hookbait to the bottom without without it being battered by tiny roach in the upper water layers. After 45 minutes I felt that I was behind most anglers in my section so I decided to focus my attention to my short lines down the edge and this soon paid off. At first there was lots of good sized roach down both sides so I managed to get my head down and fished solidly for these until the F1s turned up. I guessed I had managed around 20lb of roach before I started to bag a few F1s which was a big help towards my final weight. I managed 26 big F1s so along with the roach from earlier on I managed to weigh in with 90lb which was good enough for another section win. 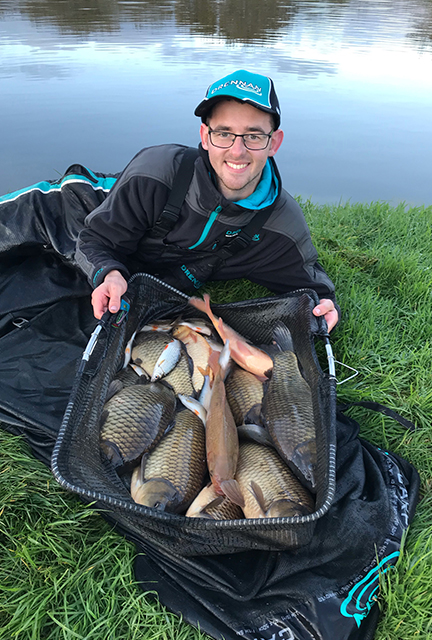