The morning had been quiet with my alarms stubbornly refusing to signal a bite, which was surprising given the mild temperature and a healthy wind blowing a good ripple across the pit. 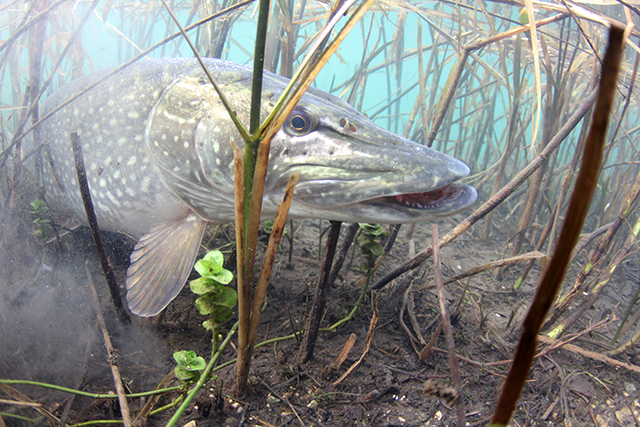 I was certain a big pike wasn’t far away, in all probability resting inside one of the numerous weed beds that still proliferated the bottom. Whatever the reason winter now seems unable to strip a still water of vegetation and today had been a familiar story of ensuring I had cast to clear spots. Feeling them touch down on the gravel had given me the confidence to be patient. Likewise, my tackle and approach, tried and tested over the years, didn’t lead to doubts during a quiet spell.

An E-Sox Piker 12ft Bait rod had been coupled with 60lb E-Sox Piker Braided Reel Line. This might seem over gunned to some but I never take risks with pike and light tackle is nothing more than irresponsible. With a diameter of 0.36mm, it casts nearly as well as 15lb line but is 4 times stronger, making it impossible to break with a rod. Connected to the end of this was 6 feet of lead core, which has more fans in the carp world. Not only does it stay close to the bottom near the terminal tackle but is also great to grab hold of should a jack need to be unhooked in the margins and is even more bulletproof than 60lb braid. Onto this sat a large ceramic run ring and 3oz lead that would pass freely without resistance should a pike take the bait. A large bead and a size 9 swivel terminated the leadcore before a 12-inch length of 28lb Drennan Green Pike Wire and two size 6 semi-barbed Extra Strong Pike Trebles formed the trace. Whipping via a twiddling stick ensured everything was safely connected supplying a set up that hasn’t ever failed me. Simple and strong – just the way I like it. 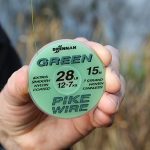 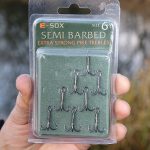 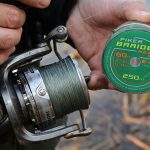 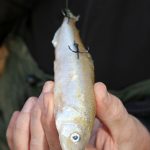 I had sardines at my disposal but due to the length of the cast involved and perhaps the need to recast in a bid to find a clear spot I left the oily fleshed fish in the cool bag in favour of large smelt. I’m not sure quite why this fish is so appealing to pike but I guess all I need to know is that they love them and attached each one confidently. With dead baits, the top treble is placed in the tail root and the bottom towards the middle, once this was completed the cast was made. Each bait sat at 50-60 yards in 12 feet of water but was well spread out to search the swim. I would be recasting every hour not only to try new areas but also to trigger a feeding response. Often the disturbance caused is enough to arouse an otherwise docile pike’s attention.

Knowing the exact moment when the bait is taken is vital to prevent deep hooking so a drop arm indicator was used in conjunction with an Optonic. These alarms are ancient but I have yet to find anything better when loose coils of braid are peeling off the reel spool, indeed check to see if your modern alarm actually raises a bleep as many don’t. I had every confidence in both the setup and location so despite the slow morning I remained optimistic that the afternoon would bring a change of luck!

A kingfisher with its azure blue jacket flashed by and I mused about how common this bird is, in fact, I hardly ever go fishing without seeing one. The next movement of a vivid colour, however, this time red, came shortly afterwards and was what I really wanted to see. As the tension on the braid increased so my indicator lost its grip, released to fall freely until it clonked against the back rod rest. A wonderful sound and now accompanied by the chirping of the alarm. Such a call meant I wasn’t sat down for long, rushing over to the rod, picking it up and feeling the braid passing through my fingers. I gave it perhaps 5 seconds before engaging the bail arm, spinning the reel handle to supply tension and swiftly following it up with a strike.

By the arc, in the carbon, I knew immediately I had made contact but not with a big fish, something that was confirmed as I drew it towards me quickly. A jack of perhaps 5lbs floundered in the margin and I chose to dispense with the landing net and unhook it in there. I’m always more wary of small pike especially with a flying treble as there was in this case. I took great care and quickly we went our separate ways, neither of us harmed in any way. I had hoped for bigger but to start with I was happy to have had a sign telling me that the pike were on the feed at last.

Another half an hour passed before the indicator smacked against the backrest again. I can’t think of a better type of bite in fishing, one that gives you a chance to ask what has taken my dead bait? The excitement was palpable as I made the strike and this time I wasn’t disappointed. A huge headshake was transmitted back to me as a large pike expressed its disapproval with my actions. With gills flaring it stayed deep at first, ripping line off the reel’s clutch before changing its plan to shed the hooks by breaching the surface in a spectacular display. The aggression however savage is soon spent with a pike and once I had endured the fireworks the second half of the battle was far more placid allowing me to enjoy the sight of hundreds of light green polka dots pass by in the clear margin. It was a sight to behold on a winter’s day as was the pike rolling over the net to reveal to a big white belly in surrender. A beautiful prize that I can never get enough of. 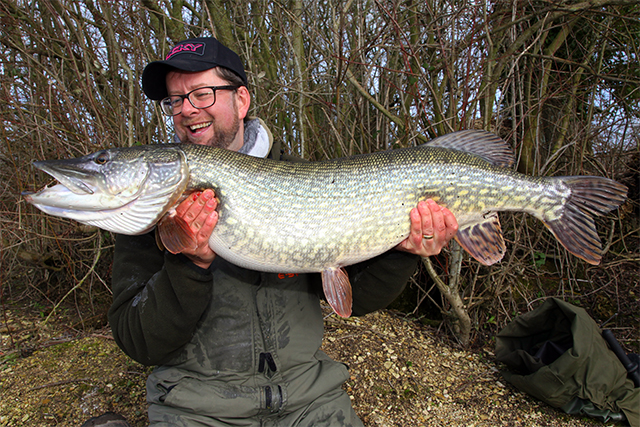