A cold winters day spent wandering the banks of a river with a float rod in hand and a pouch full of maggots has to be one of the most enjoyable forms of fishing.

A river never sleeps and its face is never seen the same twice, this flux provides a challenge for both angler and fish constantly trying to pull everything downstream. Perhaps then when you don’t fight it and choose to go with the flow everything seems easier.

It had been a while since I had spent a day in the company of the Lady of the stream but I knew that if there was one fish that would give me a confidence boost in my float fishing ability it would be her! The grayling is a gracious creature that forgives many mistakes but once hooked her persona changes and she will happily leave you broken hearted with a hook pull. So as I fired the first pouchful of maggots into the river I knew what to expect – plenty of bites and some titanic tussles. For a couple of minutes, I fed the swim while setting up the tackle.

A 14-foot Acolyte Plus could possibly be the finest grayling rod ever combined with 4lb Specimen Plus which has been heavily sprayed with line floatant. Sitting at the business end was a rather portly 4 swan Drennan Loafer float whose shotting capacity could have sunk a battleship! However, I learnt a long time ago that fast flows need stability. I, therefore, needed to control the course of the hookbait and not allow the flow to waft it around in an unnatural manner.

Agricultural, as it might be the shotting pattern, would achieve this plus when positioned correctly avoid a tangle all day. A string of AAA at the three-quarters depth point started this followed, at equal distance, by groups of BBs, no 4s and no 6s. To connect my hooklength, which was 4lb line to a size 18 Super Spade, I used a micro swivel and this was, as always, positioned in the second group of shot up from the hook. I don’t know why but by being positioned here tangles are eliminated providing, which I did, its cast with a feathered reel spool keeping hook and loafer maximum distance apart when impacting the water’s surface. 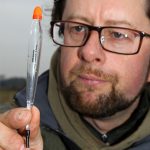 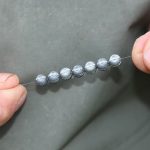 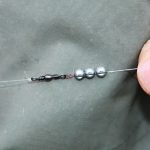 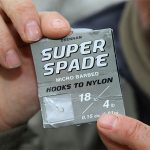 Cocking and then being taken downstream I ensured I kept a lead on the bulbous orange tip allowing it to move naturally but never out of control until the moment a grayling took over, taking it from my world momentarily. A swift strike brought it back although now I was going to have a tug of war about ownership. The sweet arc of carbon in my and was a joy which refused to relent for minutes as a silver flank brushed with mint green twisted and turned for all its worth, unhappy at the prospect of having its picture taken. This 2lb specimen and others to 2lbs 12oz did, fortunately, get viewed through the lens but it was the one that got away that will linger longest in the memory. As I brought it into view for the first time I swear what I had hooked was a sailfish and then without mercy, it was gone leaving me with a haunted expression and a need to lie down!

The grayling had provided wonderful sport whilst wandering the river bank with a pouchful of maggots and with the tackle prepared, plus plenty of grubs left, a couple of days later I felt the urge to go again, although the venue, as well as the species, would change. My new target was pound for pound not as hard fighting but certainly more fiendish – chub were on the agenda.

At last a bluey green tinge ran through the Thames and with it came the visibility required to fish with maggots! The only change I needed to make was the float selection due in the main to the depth I would be fishing in (6ft). Although perhaps an untypical choice it was a big Avon because the trot in question was just under the tip, which still allowed for a top and bottom pattern as well as the pace of the swim. This was caused by a weir pool downstream creating extra pace on the river so I followed the same philosophy that I had with the grayling with control being the key. So too was the little and often introduction of the maggots, although I was more patient this time feeding for 20 minutes before I considered wetting a line. By then I was convinced that the shoal I knew to be living under the fallen tree had moved upstream towards me with gulping, greedy white mouths.

Get a combination of location and the correct conditions to fish maggots and catching chub can prove to be remarkably easy. My first trot down gave that all-important sign that the plan was working, a sharp bob on the float. Second, go through I ensured the hookbait travelled alongside a cloud of grubs, knowing full well the confusion would do the trick. As I set the hook in a rubbery lip and the rod hit the proverbial brick wall, which it did 8 times in total, I couldn’t think of a better way to spending a day on the river.