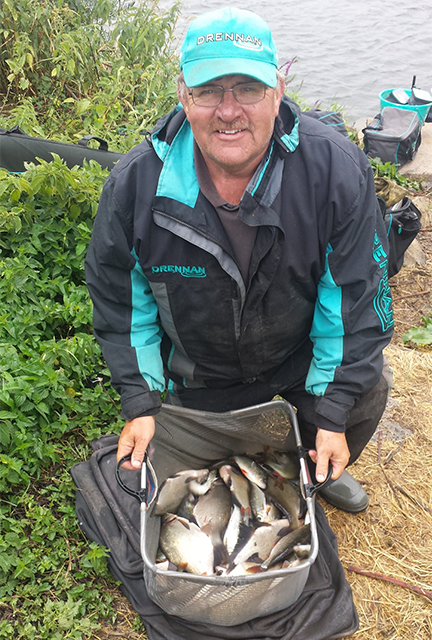 For the last four or five years I have fished the Tidal Trent quite frequently and enjoyed it most times, the river is far better than it used to be. I remember winning my first big match on the Tidal Trent at Dunham bridge 45 years ago on a 200 pegger with 7lb 4oz of all Roach. I caught everything on a centrepin reel using a crow quill float as there were no feeders back in them days! Today it’s totally different the river is lifting with fish and of all species. The return to this part of the river has been a bit of a learning curve for me but I’ve gradually improved and now feel pretty confident that I can get the best out of most draws. Because of this I have been looking forwards to this year’s tidal festival fished over 3 days.

Day one saw me on the Laughterton length on peg 34 which was a good draw and gave me a good chance of catching some skimmers. I set up 3 feeder rods as there was no chance of any float fishing on these pegs with such big tides. I set up 2 Acolyte 13ft distance feeder rods, these rods are not just brilliant distance rods for bream but fantastic on rivers too. One had a 3oz tip and a 2oz opened ended feeder, the other with a 4oz tip and a 3oz feeder. My third rod was a brute! A 14 ft Beastmaster with a 5oz tip and a 4oz feeder, all of these rods would come it to play as the levels rose with the tide and the pace altered. As the match started the tide was flooding in with great pace, I started with the heavy rod at 30 turns feeding loads of casters, dead reds and chopped worms. Even with 4oz on I was giving it a good bow to keep the feeder still! 40 minutes in I netted my first pound Skimmer 6 more followed before the tide topped out and turned. I had now swapped to the lighter rods and was expecting another run of Skimmers but it never happened. I was getting small fish rattles on big baits so halfway through the match I made a decision to fish for anything that swam. Fishing worm head, single maggot and caster brought bites till the final whistle mainly from Dace backed up by odd Hybrids, Roach and Perch. I probably caught 14lb of these fish altogether and with the Skimmers they went 23lb plus for second in the section and a good start to the festival.

Torksey peg 22 was my destination on day 2, another good draw! The river here is a little narrower but really powerful, this section tends to colour up more with the flood tide which really helps the fishing. The same 3 feeder rods were set up as the day before the only difference would be a different strength of hooklength choosing 0.19 instead of 0.17. This is because there’s always the chance of a Barbel and because of the coloured water allowing me to be more positive. The tide was flooding in at the start of the match bringing some good colour, the signs looked good. With the tide raging in I decided to fish about 16 turns, after 30 minutes I’d got 2 Skimmers and 2 good Hybrids in the net. A good start but an hour later I’d not had another fish, as the river started to slow I decided to top up my long feeder spot so out went the big rod to 30 turns getting plenty of bait in. The river eventually slowed right down so I switched to the lighter feeder rod, a pound skimmer came to the net and things were looking promising. Over the next hour the spot produced 10 more Hybrids, the pace again started to pick up so I came back to the short line. Here I managed another 8 Hybrids to finish with 23 fish for 19lb plus and the all important section win. It was now game on for the festival!

North Clifton peg 10 was my final destination, not the greatest draw but it was an end peg which always helps. 30 minutes into the match I’d only had 2 dace on the feeder. I’d been loose feeding bronze maggots and hemp about 2 rod lengths out and switched to a 10xno4 stick float in 8ft of water. I had bites from Dace immediately after switching, no quality stamp but I was catching steady even when the tide turned and started flooding. As the river slowed towards high tide I made a conscious decision to go back on the feeder just in case some skimmers had finally turned up. Unfortunately that was a wasted 40 minutes, no matter what was happening above me I decided that I was going to see the match out on the float. I caught steady until the end of the match and finished with 140 small Dace and the odd Roach. The inevitable happened in the last hour, the angler above me had a good bream and two skimmers, it was going to be close. As the scales arrived my fish went 9lb 2oz, the Bream and Skimmers weighed 8lb 15oz, luck was on my side. Further up the section there was a 12lb net of roach which easily won the section but I was more than happy to finish second.

Back at the headquarters three of us had tide with exactly the same section scores, a first and two seconds for 5 points with no weight count back being included. This meant that the title was shared between the three of us which is what happened last year. The river fished really well considering the red hot weather, top weight was 40lb of Hybrids from Torksey by organiser Alan Henry. There were also many 30lb nets which included some nice Barbel, the whole 3 days were really good and I am looking forwards to next years event. 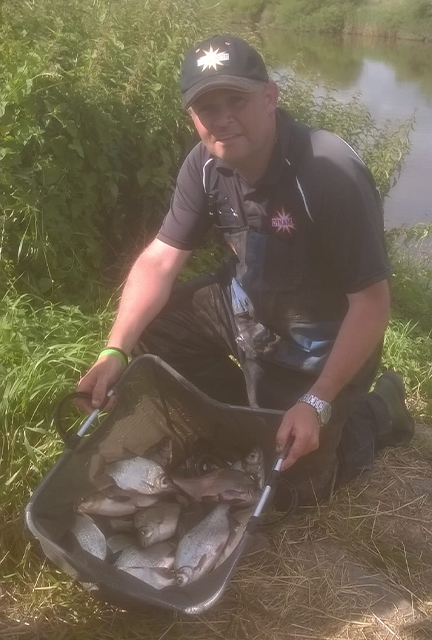 Alan Henry with a quality net of hybrids