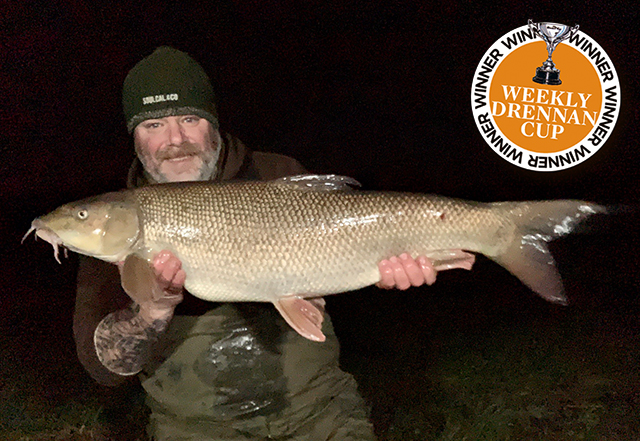 “Been fishing this area with luncheon meat hookbaits for around 4 weeks with not much to show for my efforts, but on this session I switched to fishing glugged 18mm boilies topped with a 12mm pop-up”

“I’m a bailiff on the stretch I fish so I know the swims quite well. Knew there was a good chance of catching a barbel in this slack next to a weirpool, and with the river up slightly there was an even greater chance”

“I needed ‘to spend a penny’ and as I was peeing I heard a splashing noise. Turned my back to see my tri-pod had fallen over and my rods submerged in the near bank flood water”

“ I stopped peeing and ran over to the tri-pod and picked it up, but it was clear I had a take on my left-hand rod. Fished quite a tight clutch so I was lucky my rod wasn’t taken into the river. I used snag ears with my alarms so that definitely helped me”

“Couldn’t believe I had this bite when my back was turned! Convinced the barbel are watching you lol”

“So I had the rod in my hand and it was strange because I thought I was snagged. There was a big bend in my rod but not much movement – thought I was attached to the bottom… then the bottom started moving”

“It was just a proper heavy lump and a slow sensation during the fight. I’ve caught 13lbers that have put up better fights – that’s for sure, so this barbel really got the adrenaline going as I knew it was going to be a proper monster. When you’re fishing the Thames there’s always the chance of potential British record”

“The fight lasted around 5-10 minutes but it felt like a lifetime. I had snags to my left which the barbel normally go for but I managed to keep this barbel under control and just like that, it was in the net”

“I’d achieved my angling dream – when you think of dreams in fishing this is the ultimate achievement for a barbel angler. It’s one of the biggest barbel in the country and potentially could be the new record one day”

“I might have to take up golf now, I just don’t know how I’ll ever beat this fish!”

“I do know of three 20 pounders that live in this stretch of the Thames, so I guess I do have something else to chase”

“For me the Thames will be produce the next record. The Trent is giving the Thames a good run for its money but it doesn’t quite have those consistent numbers of 20 pounders yet.”