Double Leam is a vital top-up feed in continental competitions and one which Steve also rates for roach, perch and bream on UK venues like the Gloucester Canal and Stainforth and Keadby Canal in matches where bloodworm and joker are allowed. 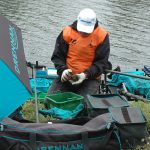 “One important tip is to scatter some leam onto your joker then wear latex gloves when distributing it evenly, to avoid damaging and wasting any of this fragile bait in matches where bait limit rules apply,” said Steve, adding: “Three balls of Double Leam is a great opening gambit for perch on winter canals.”