A string of specimen crucian carp catches, topped by a 4lb 4oz monster, suggests that there’s no better time than now to get out and target one of the nation’s favourite species. 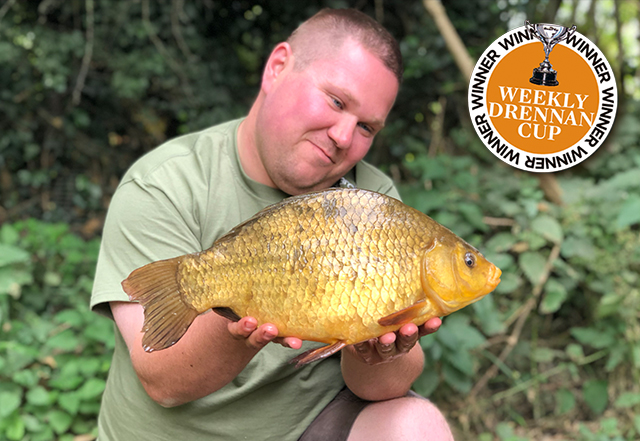 Whilst some of the country’s anglers have been struggling to catch during the current heatwave, those who have been crucian fishing have been enjoying red-hot sport.

One of them was 26-year-old Scott Walker who hooked into this rare 4lb 4oz beauty during a recent session at Lizard Fisheries in West Drayton, London.

He told Angling Times: “I’m a carp angler at heart but when the lakes were busy on this particular day I decided to switch to targeting crucians and perch on the float instead.

“I’m a bailiff for this water so I know there’s a good head of perch in here, but also know that there’s a stock of big crucians – but they very rarely show.”

Whilst fishing the margins using his 13ft Drennan Float rod, centrepin and pole-float rig boasting two red maggots on the hook, it wasn’t long before Scott received a number of dips on the float.

“I’d been feeding maggot and 2mm Mad Baits pellets over the top and started to catch quickly,” added Scott.

“Within a short space of time I’d caught a number of bream topped by two proper carp to 23lb 8oz, but my next bite was altogether different.

“The fight felt somewhere between a small carp and a bream, so when it rolled on the surface and I saw it was a big, proper crucian, I was ecstatic.

“It was my first ever crucian catch and one that I don’t think I’d beat for a while – it was the perfect session. I didn’t bother recasting after I slipped her back, and just sat back in my chair in shock.”