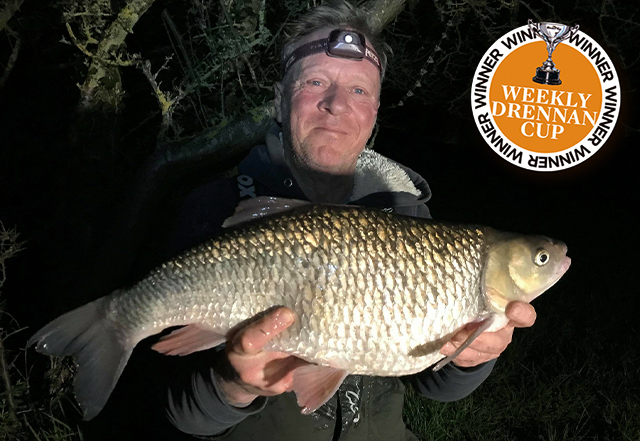 “on the first four all I’d caught was a 1lb chub. It was now the evening of the final day of the river season and I finished worked at 4pm and got down to the river for around 5pm. It was going to be my last chance for three months. I decided to try a new swim to the ones I tried prior and fed a few boilies and some 6mm pellets next to a tree, which was in an eddy to my left, but I knew this swim was very snaggy on the bottom. It’s almost like a cage made up of broken branches, twigs, debris etc. With this In mind I stepped up my reel-line to 15lb as I really didn’t want to mess about trying to pull a potential big chub from the snags. At 5:30pm I lowered in my free-running leger rig, which has a 20mm Oxford Carp Baits GS boilies on a hair. I wrapped this in matching paste. A PVA bag of chopped boilies was nicked on the hook. For nearly four hours I hadn’t had a bite, and I was thinking all the while that my chance had gone, when at 9:30am the tip of my rod smashed over. I wasn’t sure what it was but some violent head tapping got me thinking it was a chub. I put loads of side strain on it but my heart sank when everything went solid. It had done me round a snag. I gave it some slack hoping that the fish would come out, and thankfully it did. I quickly got it to the surface and saw it was a monster of a chub. A few expletives were said when it went in the net…When the scales registered 9lb 1oz I just couldn’t believe it, so I rang a mate who came down and helped re-weigh it. A second reading of 9lb registered so we went with that.

“I’m still buzzing now – I thought my 8lb 1oz chub from earlier on in the season was special, but this was something else. I’ve put some serious time in on the Thames this season, so I’m incredibly proud of this catch and many others I’ve made this season. When I woke Sunday morning, it finally dawned on me that I’d came within ounces of breaking the British Record. It’s a catch I’ll never, ever forget for the rest of my life”