“After weeks of chasing shadows, I looked down into the net a realised that this fish was different class!” 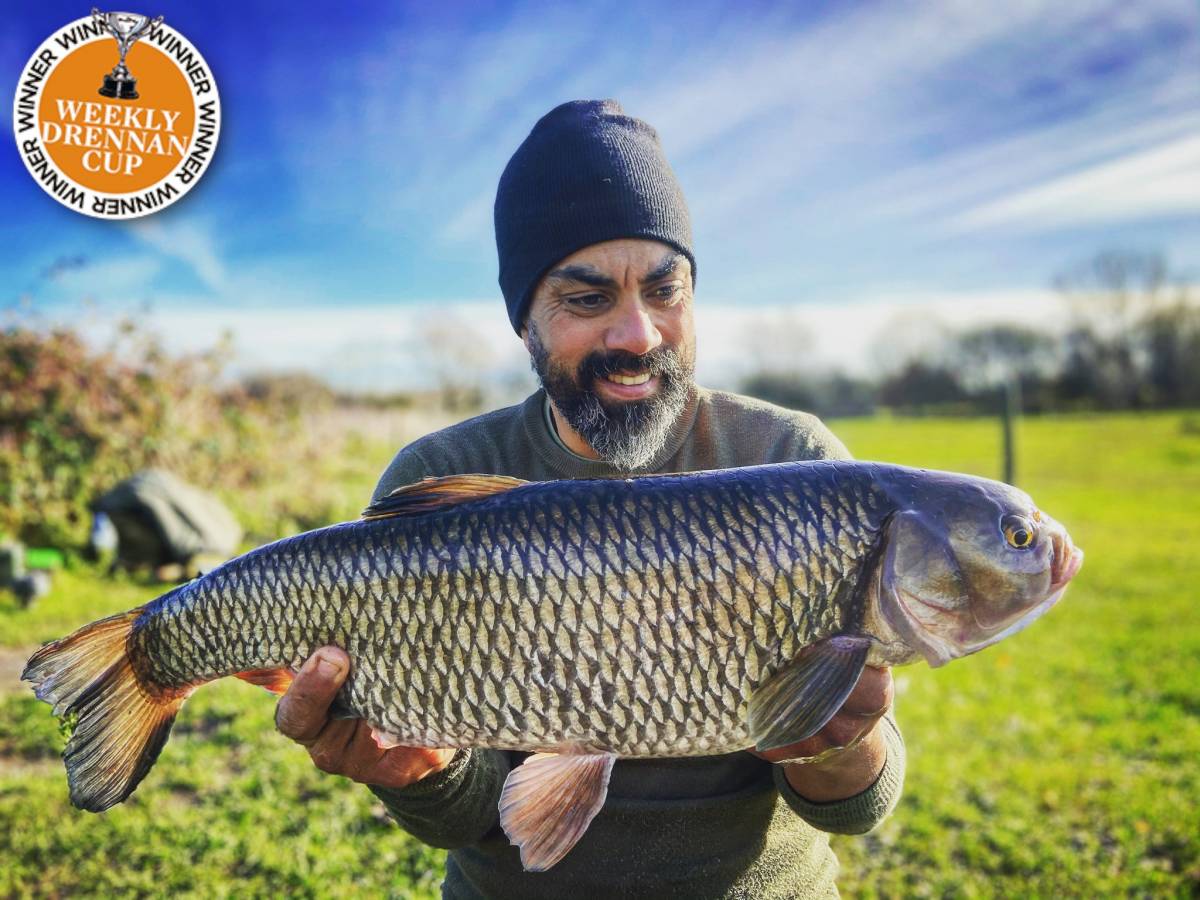 Richie explains “I honestly feel for my mates John, Ozzy and Stoner having had to put up with me sulking over recent weeks as I have struggled to make sense of an indifferent set of fishing trips! With advice like ‘Not every trip can be a red-letter day!’ and ‘its only fishing mate’ ringing in my ears, a refocus was needed.

Having failed on The Avon and The Stour in search for chub with a feeder and the Frome searching for a grayling, I decided to retreat back into my comfort zone and dust off my 15ft Acolyte, grab a bundle of stick floats, a catapult and prepare for trotting session on the Stour. Trotting a float is something I can do fairly well, and the combination of an early start, crisp cold morning and 6 pints of flavoured maggots gave me a fighting chance to pick up one of the resident river monsters.

With a full moon as the only light, I made my way along the frosty bank to my chosen swim. I had some time before the sun would clear the tree line to cast enough light on the swim for me to see the line of my trot and my float clearly enough to start fishing, so I used the time wisely. The temperature was hovering around zero, so I decided the priority was to set up my brew kit! Just the sound of a stove burning somehow makes you feel warmer and with the kettle on I knew a brew was not too far away.

I began to catapult maggots into the darkness towards the overhanging snags on the far bank, a pouch was fired every 30 to 40 seconds and between snaps of the elastic I threaded the line through the rings of the rod by the light of the moon and set up my stick float. I planned to bait the swim regularly until it was just light enough to present a float, so a steady flow of maggots was fired across to the snags for about an hour and 20 minutes, the aim was to draw the chub from under the snags to the crease 8ft from overhanging branches, it was there I wanted them to gain confidence and feed, this would also create an area that I could accurately present my float and run a steady, smooth trot

The sun took forever to clear the horizon, this might have been me being a bit keen to get going, but while I twiddled my thumbs waiting, the routine of pulting maggots out there stayed the same! Finally, it was time to make my first cast. I was certain it would produce a bite as it landed softly inches away from danger. I lifted the rod and held the line to ease the trot as close to the overhanging bushes as possible, I ran the trot to the end of the swim but the float didn’t dip a millimetre!! As I retrieved the float I felt robbed! I was sure it would go first cast.

I trotted for 40 minutes but with no action I decided to make a few changes, so off came the hooks to nylon and I tied a longer hooklink. I used 2.9lb Supplex and a Drennan specialist wide gape size 18 hook. Two dust shot completed the changes and proved to be inspired!

Continuing to feed the swim regularly and being very accurate with the cast finally produced a bite, it was so subtle, one tiny dip, more like a crucian bite rather than a typical chub bite, a quick snap of the wrist and I was into solid a resistance, I thought I hit bottom but held the curve in the rod for a few seconds more in hope than anything else … but then, thump, thump… and she was off.

As she dropped into the main flow I could really feel her weight, I took things super easy and soon had her on the surface. I eased her slowly into the net and she was mine!! After weeks of chasing shadows, I looked down into the net a realised that this fish was different class! It certainly changed my mood.

A PB chub, and my second 7lber, from a different river too, and both caught under a float! Packed full of flavoured maggots this 7lb 6 leviathan beat my previous best by 2 ounces. She was caught on two red maggots nicked onto a size 18 hook, maggots were dusted over night with hinders crushed hemp ground bait and sprayed with hinders Betalin plum.
I owe a huge thankyou to my mates, when things are not going to plan it’s comforting to have a shoulder to sulk on.”