Groundbait also proved to be a key component in Paul Williamson’s recent session where he banked this 4lb beauty after a short pre-baiting campaign. 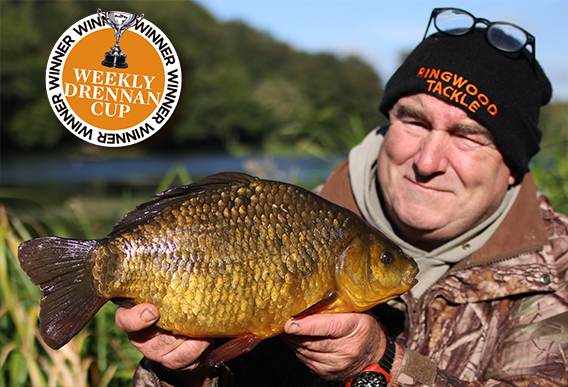 Groundbait also proved to be a key component in Paul Williamson’s recent session where he banked this 4lb beauty (inset) after a short pre-baiting campaign.

Targeting Devon’s Milton Abbas syndicate lake, the 57-year-old fishmonger could see the crucians cruising just below the surface but had to change his approach to catch them.

“Milton is crystal clear and presenting a rig without spooking the crucians is difficult,” he said.

“I tried float fishing but the roach became a nuisance so i pre-baited with groundbait to try and get them feeding on the bottom instead.

“This paid off as I caught the four pounder followed by a 3lb 15oz fish just ten minutes later, with both coming to feeder tactics.

“A ‘four’ has always been a dream of mine but I never thought I’d catch two around that mark.

“I’m positive this lake will do a new British Record in the future.”

Both of Paul’s fish fell to 8mm boilies in conjunction with a cage feeder loaded with groundbait.

His fished his rig over a bed of groundbait, micro pellets and hemp.