Home > News > Off To A Flyer On The Trent

A sudden change in plans saw specialist angler, Simon Ashton rooting around the garage for his barbel gear. 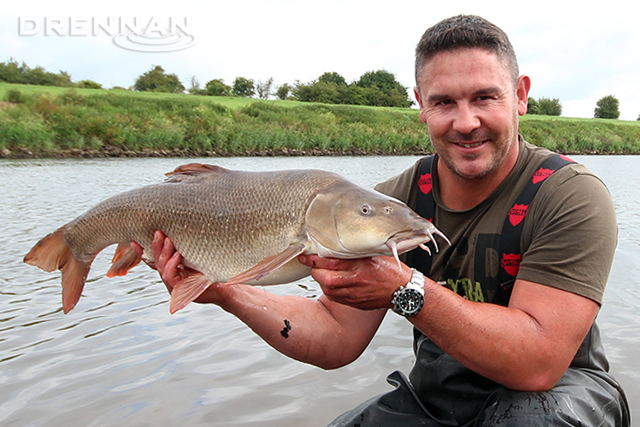 Thursday evening saw me pitched up and ready for midnight on the banks of the mighty River Trent. The section I chose was tidal and is certainly not your average river! At least 4oz of lead is needed to stand a chance of holding bottom. And to make it even harder, you can also expect the river bed to be littered with boulders, trees and a number of other obstacles that will test your tackle.

My tools for the job are a pair of 2lb Specialist Distance Tench & Bream Rods coupled with mini pit reels loaded with 18lb ESP Syncro XT Loaded. I can’t stress enough how important it is to use a strong and reliable line with high abrasion resistant properties. Rig wise, I used a simple running rig with either a 4 or 6oz blockend feeder, depending on tides and depth of the river. My 4ft hooklinks are made of Supplex Fluorocarbon to which a size 14 or 16 Specimen Plus hook is tied with a hair.

With a few hours to go before fishing could commence at midnight, I decided to mix up something that would hopefully pull a few fish into my swim and keep them there. I had brought with me a bucket full of Sounubaits Oily Pellet Mix and I thought this would be perfect. They come in 3kg buckets and consist of mixed pellets from 1 to 6mm and a blend of crushed pellet/groundbait. I simply added a few 6mm krill pellets, a big handful of crushed boilies and a pint of water flavoured with liquid krill. I leave the mix for ten minutes to soak up the water, then add a little more if needed to achieve the right consistency to stay in the feeder.

Just after 9 pm, I began baiting the area, in this case, the deep boating channel. At 11 pm a further 10 loads of bait went in, followed by another 5 at 11:45 pm to hopefully keep any fish in the area.

Both rigs were cast dead on midnight. One with trimmed down Sonubaits Crab and Crayfish boilie and the other a banded 8mm Krill pellet. I stood in anticipation hoping for a reaction. Six minutes followed before the inevitable happened. The rod wrenched over and I was into my first fish of the seson.When you’ve not played a

When you’ve not played a barbel for nearly six months it’s easy to forget the power of these fish! I turned on my head torch and gazed into the murky water but couldn’t gauge how big she was. It wasn’t until I laid her on the unhooking mat that I realised I had just caught a double figure barbel on my first cast of the new season!

The night passed without sleep and I made the most of the occasion landing another 5 barbel to 9lb. As dawn broke, I decided to recast and put in a few more feeders of bait, but before I could do so the rod was nearly pulled from my hand. After an immense fight, I finally managed to net the longest barbel I’ve ever seen. I literally couldn’t believe my luck, the scales settled on 12lb 15oz, a new personal best and amazing start to the glorious 16th.