In situations where the tench pick at food instead of gorging, fishing at ‘dead’ depth will always be more productive but this can be tricky with a standard set up given that the depth may be fishing greater than the length of the rod. 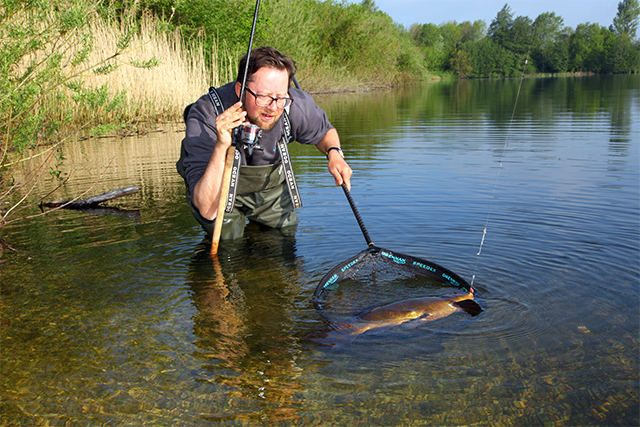 The slider is the answer to this quandary. Constructed by first tying a stop knot out of 6lb mono onto the mainline. Although a little bit abrasive if not wetted when moved, I chose this over Power Gum because this material would slip too easily. Next, I thread a bead onto the line with a very small-bore hole followed by a large buoyant 4 swan bodied waggler. This isn’t locked in place but allowed to run up the line until the depth set by the stop knot. All the cocking shot is fixed within the final three feet, starting with a single number 4 that stops the float smashing against the bulk shot of AAAs on the cast 12 inches below. On the final section, I place three dropper shots, slowly decreasing in weight towards the hook.

The key to fishing the slider float is accurate plumbing – do not rush it and make sure your bait is only just kissing the bottom.

Also, get up early! Especially during the warmer months, most species are feeding in earnest long before most people get out of bed. Rise late and it might be impossible to catch.