The reports of a trio of 3lb-plus roach topped by a near 4lb specimen suggest that now is a perfect time to target a new personal best. 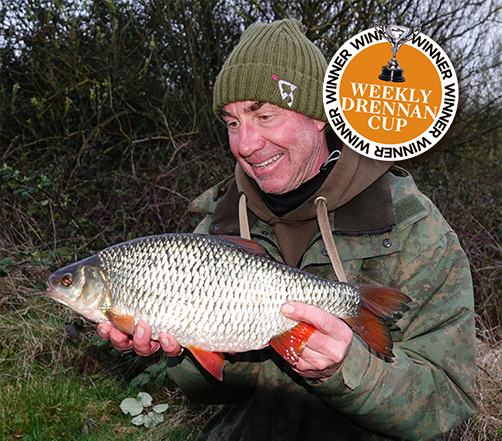 All three redfins were banked in a manic five day window and have proven that big roach are now packing-on the ounces ahead of their annual spawning period.

We start with Wiltshire-based angler Mark Woodage who is no stranger to catching big roach having won two weekly Drennan Cup awards for catches in the 2018/19 season.

His success continued further when his most recent session produced the year’s biggest roach in the form of a 3lb 14oz beauty.

The Mark-One-Media man targeted an undisclosed southern gravel pit during his session and finally received a tentative bite after hours of inactivity.

He told Angling Times: “I was fishing a spot at 60 yards with Drennan maggot feeder bombs fished over a bed of Bait-Tech chilli hemp.

“After spending the whole day totally bite-less I was thinking I was in the wrong area but just as I was starting to pack up my alarm signalled a single blip, which showed a drop back of about one inch.

“A good strike confirmed it wasn’t a crayfish and very slowly I brought the fish towards me during which time the typical thuds on the rod tip confirmed a roach was the likely casualty.

“In the crystal clear water I got first site of what was obviously a huge fish.

“I just became a wreck, shaking and praying that we kept in contact.”

Mark’s fears weren’t to be realised and he was able to slip the net under a new personal best.

“I called respected big fish angler Andy Cowley who was fishing a couple of swims away and asked him to witness the weighing.

“I was able savour a moment I’ll never forget.”