Drennan’s Sean Trafford made the most of his time off over Christmas and spent a day afloat an Oxfordshire Stillwater in search of some of the big pike which lurk below its surface. 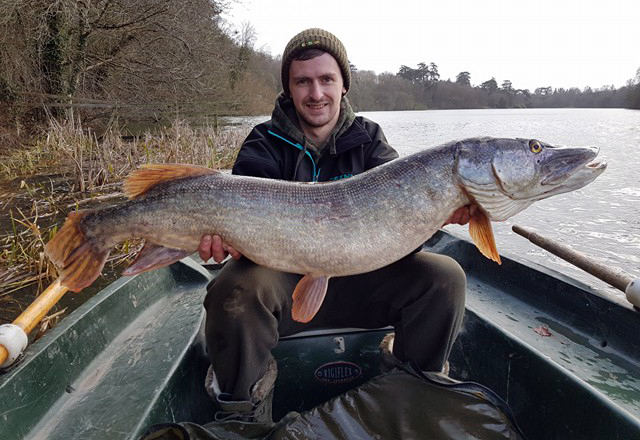 Making the most of a rise in temperature, Sean arranged for a day’s pike fishing with his dad Mick for company. To ensure they made the best of the time available they headed out at first light and soon found themselves rowing out into darkness on a mild but windy day.

After visiting several of their preferred swims and trying a few different baits which unfortunately didn’t result in any pickups the pair headed towards another favoured spot which has produced a few big fish over the years in deeper water.

After dropping the anchors and casting out, Sean didn’t have to wait too long before his Zeppler float sailed away and he was in! After a fairly short battle and a few lunges towards some marginal snags, the fish was in the net and a sigh of relief was let out. The scales swung round and signalled a new personal best of 25lb 4oz, upping his previous PB by 2oz.

“With the wind howling across the lake the Zeppler floats stood up strongly against the waves and with the new hi-vis paint finish. I don’t think there is any better feeling in pike fishing than watching your float bob around and drift away into the murky depths.”