“It stayed deep and gave a really dogged fight, but I was still shocked when I saw the size of it.” 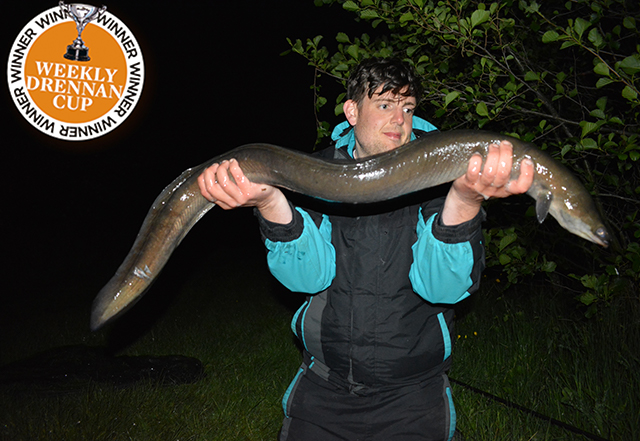 Most anglers would be delighted to catch just one personal best each spring, so you can imagine Joe Millar’s delight when he landed a trio of them in one spectacular session.
The Kent-based all-rounder was on a trip to a gravel pit in his home county when he banked not only a new best for his tench, but also a monster 7lb 1oz eel and a huge carp, both of which were also comfortably new PBs.
Joe told us “I had a lot of maggots with me, both live and dead, and on the second night I decided to spod out a good hit of deads and bait up an area to try for a decent eel, as the tench weren’t feeding in darkness. I took off the size 14 hook I was using for tench and replaced it with a size 10, before cramming about six maggots onto it. The baiting-up clearly worked because within the first hour of darkness I had 10 eels to a best of 2lb 12oz.
It went crazy, they were taking the bait instantly! On the eleventh bite however, I could tell that I was connected to a different stamp of eel altogether. It stayed deep and gave a really dogged fight, but I was still shocked when I saw the size of it.”
In the same session Joe also landed 38 tench between 4lb and 8lb 13oz, the latter being a new personal best, and the haul also included a new PB male tench of 7lb 3oz. And as if that wasn’t enough, he also slipped his net under a 35lb 8oz carp, just for good measure.
“I put the carp rods out at night with boilie hookbaits, but in the end it was the same maggot rig on one of the tench rods which it took a fancy to! It beat my old PB carp by over 3lb and capped a session that I’ll probably struggle ever to beat!” he added.