“After a long fight and about 3 final surges, I slipped the net under her” 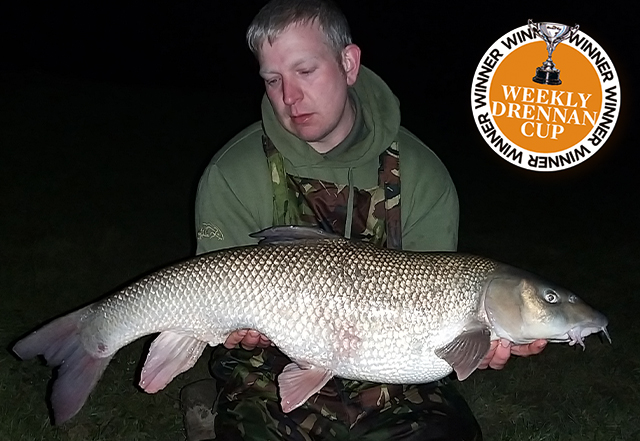 “I had been planning my last 2019/20 season trip to the Tidal for several weeks and was planning to head down for first light on the 12th and fish until close on the 14th. When the rain came earlier in the week and I saw the river levels flying up I thought I would struggle to find a suitable swim on the Barbel Society stretch at Sutton on Trent where I was heading. The season has been a nightmare already so I was determined to make one last effort despite the rising river.

On Wednesday I called my good friend Paul Fisk from Fiskys Feeders to see if he had some big leads and feeders in stock as I didn’t have anything above 6oz and luckily he did so I picked some up and was ready to go. I left Leeds around 0445hrs and on arriving at the river around 0600hrs there was someone in my first choice swim already so I had to get the barrow loaded due to the flooded track being closed. After chatting to a few lads for an hour or so I headed off for a back breaking walk to my closed swim.

The river looked awesome, well up and chocolate brown in colour and the south westerly was warm enough but getting stronger by the minute. I found my spots, got the rods out and set up camp around 13.00hrs. I managed to find 2 spots in a reasonably slack section but still needed 8oz to hold bottom due to the volume of water pushing through. I introduced about 40 boilies upstream and fished a size 8 hook on a combi link with one of my homemade 20mm Mainline boilies on each rod. A quiet afternoon turned into darkness around 1800hrs and then about an hour later was downstream rod ripped off. After 10 minute battle I got the net out into the water and I could see she was a very big fish. She decided to have one final lunge and before I could loosen the clutch everything went slack as I’d be cut off on a rock …gutted.

Rod back out and on the same spot and 40 minutes later off she went again. I managed to slip this one into the net and the scales went round to 15.10lb, smashing my PB by over a pound. Get in!! A rough night with high winds and rain but no more action. The next day was quiet but I kept on introducing my bait steadily knowing that night time was when I had my best chance to catch so I wanted to ensure that any fish remained in the area with a few boilies in the swim.

As darkness fell on Friday the 13th I didn’t have to wait long. I’d jumped in the bag for a warm as it was freezing from the North westerly that had moved in when my left rod screamed off. I jumped out as quickly as I could and lifted into what I knew was another very big fish. The fish stayed low and was trying to head downstream towards a snag I knew was there. I put enough side strain on to turn her and slowly brought her back towards me. After a long fight and about 3 final surges, I slipped the net under her. I let her rest in the net and phoned Judd who was fishing 150 yards upstream to come and help me weigh and photograph the fish. I told him it was a good one but probably not quite as big as the 15.10lb as she looked a little shorter even though I could see she was very fat! When we lifted her out and out her in the sling, we both looked at each other and said this could go very big! Reubons zeroed, and I couldn’t look as Judd lifted the weigh bar. A few expletives were followed by ‘oh my god’. I looked at the digital scale reading and when I saw 18.3lb my legs started shaking!!! We put her back to rest before getting some pictures and I spent the rest if the night pinching myself. A big thanks to Paul Fisk for the last minute leads/feeders, Judd Atkins for the photographs and Steve Morgan from Mainline Baits for his help and advice with my bait. Friday the 13th isn’t all that bad after all!!!”