There was a nail-biting climax to the final round of the Drennan Silverfish League held at Rycroft Fisheries near Derby.

Chris Jenkinson was 35lb behind front runner Sean Ashby on this weight-based series. Team England star Sean was away for the final round, however, and it nearly cost him dear as Chris nearly pulled off a miracle. In the end, Chris’ 33lb 10oz final round catch saw him fall an agonising 11oz adrift of Sean’s total weight!

Chris drew peg 2 on the Carp Lake and fished pellet at 13 metres for a match winning net of skimmers. Runner-up on the day was Wayne Swinscoe on the adjacent peg with 31lb 7oz. Wayne fished pellets long for a few skimmers before swapping to a 5m caster shallow swim. Completing a tight frame was third-placed Darran Bickerton with 30lb 5oz of skimmers at 13 metres with maggots and casters over groundbait.

The whole complex fished really well and paying the top 12 in the league meant most anglers were still in with a chance of a prize going into the final match. The organisers would like to thank Drennan International for sponsoring the league and Rycroft Fisheries for their help and hospitality. 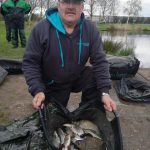 Final round runner up, Wayne Swinscoe. 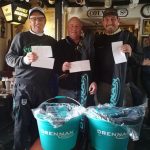