Last year’s Drennan Cup runner-up, Dan Woolcott got off to a flying start this season, banking a brace of 3lb 8oz roach last month earning his first Drennan Cup weekly. He has now backed this up with his second weekly award with this stunning 12lb 6oz tench which was part of a brace with the other one weighing 11lb 3oz! 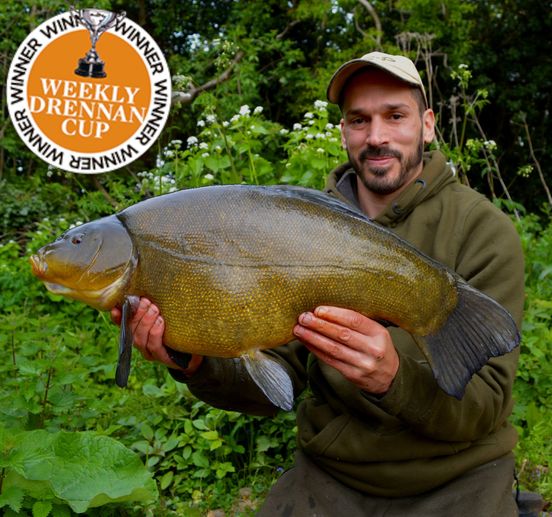 He told us “The first bite turned out to be the twelve-pounder, but it was so powerful I thought it was a carp. That was until I saw a twist of green 9ft down in the crystal-clear water, and I went to bits. I played it like a fairy! It took 10-minutes to land and gave an incredible fight, even for a tench.”

After weighing this fish, Dan rested it in the net and composed himself when he suddenly heard a bite alarm going off.

“I didn’t quite realise what was happening and looked around to see who was having the bite, then I looked down to see my left-hand rod absolutely melting off!” he chuckled. “This fish fought like mad as well, but as it neared the net, I realised a problem – the ‘twelve’ was still sat in there! I didn’t want to net this fish and see that beast swim off unphotographed, so I asked a carper who’d been watching to help. Thankfully, he did a great job, and I had this incredible brace of tench on the mat.”

Both of Dan’s fish fell to maggot feeder tactics, fished helicopter style, with a few live red grubs impaled straight on his size 14 Specimen Plus hooks. “There was no need for hair rigs as there aren’t any small silvers in here,” Dan added. “I fished over a bed of Dynamite Baits Grubby groundbait, hemp, plus dead and live maggots to get the fish rooting through the silt.”

Head over to the Drennan YouTube channel to watch this incredible brace!