One angler who has already found some phenomenal success with huge tench this season is specimen hunter, Chris Taylor, who so far has taken no less than four double-figure fish – topped by his biggest of the season yet at 11lb 8oz. 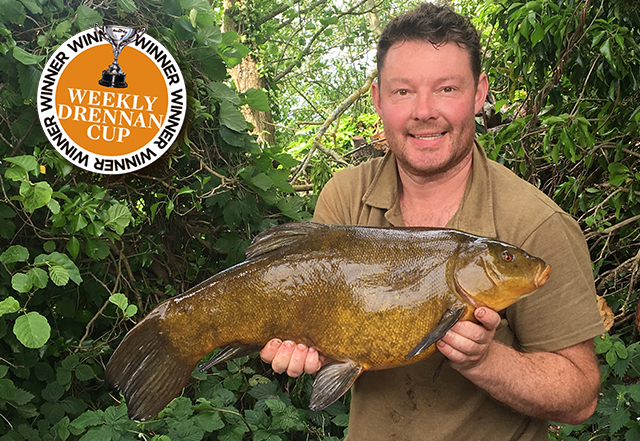 The fish was caught from a southern gravel pit, and formed part of a brace of doubles, the smaller of which weighed in at 10lb 9oz. Both fish fell to a worm hookbait presented on homemade blockend feeders. His rig comprised of 12lb ESP mainline, a 10lb hooklink and size 11 Drennan barbel hook.

Chris had to put in extra effort to make the capture though, hiking to a swim over a mile away: “I was reluctant to fish the swim due to the distance involved, but due to other lakes being closed I decided to go for it. I was exhausted after two trips lugging my gear, but soon prepared my swim with a castable weed rake.”

The Hampshire-based rod then awoke at the crack of dawn to continue the pursuit: “I was up at first light to put five Spombs of fresh bait over each of my three spots. I then managed tench steadily until 12 pm, when I latched on to something that fought much harder. After a few hairy moments of battling the fish in the weed, there could only be one winner – I couldn’t believe my luck when the dials registered 11lb 8oz.”