In a week that saw air temperatures reach heights of 25 degrees, there was little surprise that It took just a few days for the biggest tench of the season accolade to be smashed after Chris Stothard hooked into this 10lb 4oz specimen. 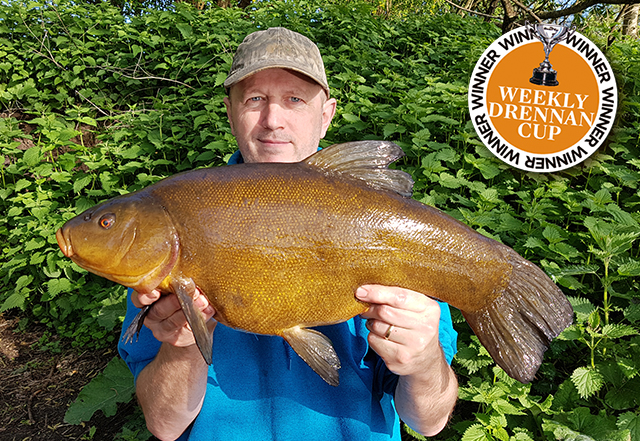 The Tenchfishers member from Hampshire bested the fine specimen on the last morning of a 60-hour session targeting a southern gravel pit.

After a fruitless first 24 hours, Chris finally put some fish on the scorecard with tench of 7lb 15oz and 5lb 3oz, but had to wait a little longer for a true monster to grace his net.

He told Angling Times: “The previous catches encouraged me to stay put – I had further sightings of tench during the next 24 hours, but no bites. No one was catching!

“On my last morning, however, it all came good. I had a 7lb 3oz tench at first light followed by a 6lb 6oz fish half an hour later.

“I started a slow pack down at 7 am then 15 minutes later the left rod was away, and what felt like a big fish was powering off to my left.

“I had to ease her out of an unseen snag but luck was on my side and she soon came out and into the net.

“I knew I had what I had come for – a spring double without an ounce of spawn weighing in at 10lb 4oz.”

All of Chris’ tench fell to worm hookbaits fished in conjunction with helicopter feeders, 10lb mainlines and 8lb mono hooklinks. He fished his rigs to the side of a gravel bar over a bed of hemp, caster and mini pellets.