Home > News > Challenging Roach Session For Carl On The Thames

Drennan Oxford team member Carl Eland recently visited one of his favourite stretches of the River Thames to target roach on the waggler.

“On arrival, the river was still crystal clear, despite a bit of rain and colour further up river. I chose to fish one of my favourite stretches of the Thames, Medley. At this time of year, it is full of roach and good weights are caught regularly from this area during matches.”

Carl began on the feeder, casting across to a clear area and fished with a groundbait feeder and a worm hookbait for the first 45 minutes. Whilst fishing the feeder, Carl began to feed his waggler line with hemp and caster. Ten pouches straight away, followed by another pouch every couple of minutes.

“This is the way I have always fed my waggler line when fishing with hemp, tares for roach, it’s a unique way, but one that’s always worked for me,” added Carl.

After a few bites on the feeder, he changed over to his positive waggler setup on his 13ft Acolyte Ultra float rod. This consisted of a 2.5g Insert Crystal Waggler fished shirt button style with a size 16 Carbon Match hook to nylon and a single caster hookbait. 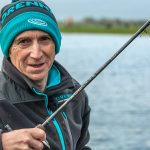 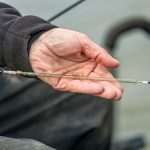 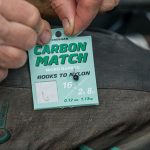 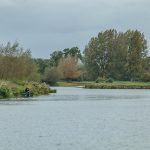 It became apparent straight away that there was lots of bleak present and bites came almost instantly before the float could even settle. Carl then adjusted his shotting pattern into a ‘bulk’ to try and get the hookbait down quickly through the bleak. The outcome was pretty much the same, with a bleak or small chublet every cast.

“A change was needed to avoid the bleak. So I switched over to my slightly lighter setup with a strung out shotting pattern and lighter line. But, this time to fish tares, and only loose feeding hemp in hope that the bleak would not find this as attractive so that the roach had a chance of getting to the bait.

It worked! First trot down with a tare, my float buried, right at the end of the swim. I was connected to the first roach of the session, and hopefully, one of much more to come.” 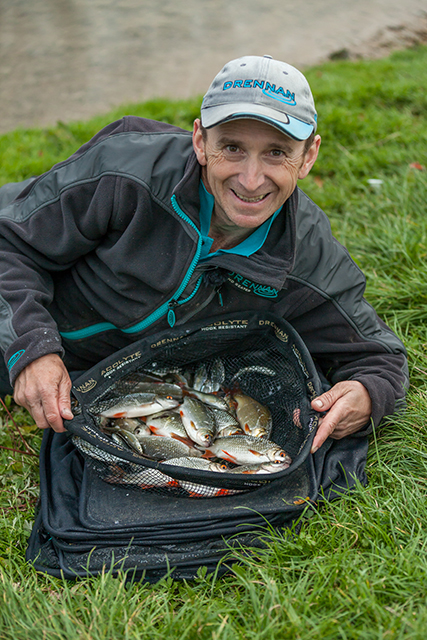 Carl continued to pick out the roach from amongst the bleak, but with the constant activity in his swim, it wasn’t long before pike became a problem, taking nearly every other roach he managed to hook.

“The only way to get the roach in is to continuously wind until they are within range of the net or are small enough to be swung to hand.”

Due to the pike activity in the swim, Carl found that by searching his peg he was able to stay in tune with the roach and keep the bites coming for the rest of the session.

“To be honest, it has been a hard day, but by changing my tactics, keeping active and searching the peg I have managed to put together a nice net of silverfish.”