It’s been a busy month or so for Steve Hemingray with several big matches on the calendar including a trip over to Italy and he didn’t disappoint. He told us “I have just finished a hectic yet successful month of matches, starting off with the 3 day festival on the… Read more

Last week I fished Top Tackle’s 5 day festival down in Brean Sands in Somerset. This included 4 carp rounds and a silver fish only round. The festival is run on 2x sections of 9 anglers each day. Monday we went to Summer Hayes fisheries and I drew peg 3… Read more

Drennan’s Jack Griffiths has just returned from a 5 day festival at Brean Sands which is organised by a local tackle shop called Top Tackle – Oxford. The festival is split between 2 sections of 9 anglers each day, competing for not only a section win, but the all-important bragging… Read more

Drennan’s Jack Griffiths talks us through the recent White Acres festival which saw him finish 6th out of 90 anglers and meant he gained the bragging rights in the office! As White Acres Fisheries was a new venue for me I was lucky enough to get there a few days… Read more 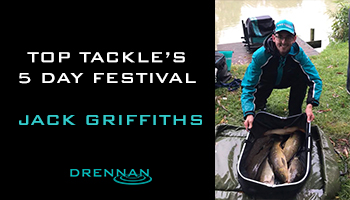 Young gun Jack Griffiths fished the Top Tackle’s 5 day festival last week and won with a fantastic 6 points out of a possible 5! Jack encountered some units during his festival  Jack reports back from a successful festival… Last week I had a brilliant weeks fishing in Somerset fishing… Read more