Specialist angler Paul Elt made a 5-hour round trip to fish for golden orfe and was rewarded for his efforts with a stunning fish of 5lb 8oz. 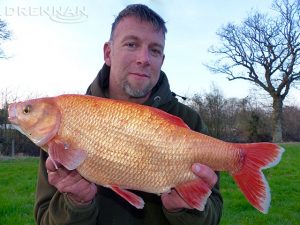 He arrived at the lake to find it empty, but with a strong north westerly wind blowing down the lake.

“I began on the float but presentation was very tricky. I had a few small tench, but by lunch with the odd fish rolling at range, I switched to my 12ft 1.75 Specialist Avon/Quiver and Oval Groundbait Feeder, incorporating a helicopter rig with a size 14 Wide Gape Barbless hook. To start I made half a dozen casts with this feeder to put down an initial bed of Green Swim Stim groundbait with a scattering of maggots.

“It was around an hour later before the first fish made a mistake. At 5lb 8oz I was more than happy! Another two orfe to just over 4lb were landed shortly after with a couple of tench, before a good fish managed to slip the hook at the net.”

“The trip was well worth it, and what they lack in the fight, they more than make up in appearance!”