Gaz Fareham has been making the most of recent sessions on the Hampshire Avon in search of big chub. 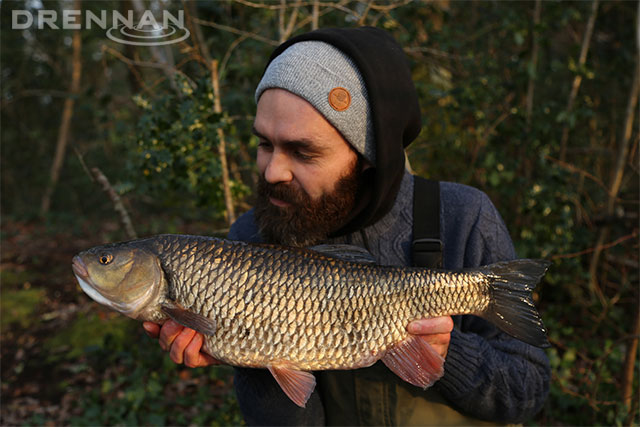 The run up had been looking good as we’d had a few floods come through in January, but it had been fining down quite nicely and I was hoping the Stour would be in fine trim for some trotting; my favourite way to fish for chub in the winter. It was looking great, up until a few days before, when it battered down relentlessly for two days. The Stour is quite responsive to rain, and sure enough, within 24 hours it was chocolate brown and charging through like the Ganges!

I went down for a look on the first Monday of the holiday and the Stour looked essentially unfishable, certainly with the sort of tactics I had in mind anyway. I needed a plan B for the week. I knew a few mates, Marcus and Brett, had been fishing the Avon over the last few weeks and, although it was slow going, had taken a few nice fish to 6lb 13oz, with the possibility they thought of a few rogue big ‘uns creeping around.

Thankfully the Avon doesn’t respond as sensitively to the rain as the Stour, so although it was up and definitely had a bit of colour to it, it was certainly fishable. Having checked the water temperature, it had dropped from nearly 12ºC degrees the week previous to 5ºC and was still falling, the big influx of cold water causing it to plummet. Hardly ideal but, still, it was better than being in work!

It was a beautiful bright afternoon when I arrived. Sadly the brisk north easterly wind cutting across the fields made the float an impossibility, so after dropping a few bits of paste here and there I settled in for the ‘evening shift’ on the cheese.

My setup was as simple as ever, 5lb Feeder & Method Mono, a simple link leger with 2 SSGs and a size 5 Super Specialist Barbel hook with a 10mm cork ball threaded on the eye to balance and hold the cheese in place.

Out of the wind it was beautiful, after a leisurely peruse of some likely looking spots, being as this was the first time I had fished the stretch, I dropped in just above a big snag and likely looking crease, pushing off the near bank and cutting out passed the edge of the trailing branches. First two ‘trips’ through, nothing, then on the third, it trembled, before the tip started plucking back and forth as the SSGs dislodged from the bottom. Just as I was about to strike the tip wrapped around, leaving me in no doubt it was a bite. A few savage lunges for the branches and it locked up momentarily, I buried the tip deeper and it pinged free. A few minutes later I was looking down at what I was sure was a pristine, brassy Avon chub.

I weighed it, but it was too close to call myself so waited the 10 minutes until Marcus arrived and we weighed it again. Agreeing it was just marginally the wrong side of the 7lb line, we settled on 6lb 15oz. Whichever side of the line it fell, it was still an immaculate chub, beautifully coloured and without a scale out of place.

We put in another four evening sessions that week, through falling river temperatures and rising levels, but without another one to show for our efforts. Just a couple of missed bites and half chances. Marcus being a bit more unfortunate and losing what were more than likely a couple of real giants. It was still a memorable week and produced my fish of the winter – even if the rain was impeccably badly timed!