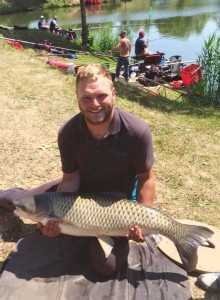 Aaron Wells has managed to land a colossal 14.4kg (Almost 32lb) grass carp with his Acolyte Carp pole during a pairs competition in France.

The Drennan Leicester team man caught the fish during the Carpo-Dream Masters two-day event he was fishing with team mate John Shellard.

“I hooked it with 15 minutes of the match to go and was shocked when I eventually saw it!” the 27-year-old from Leicester explained. “We had caught a number of carp to over 10kg (20lb) in the week but this fish was so long that we had to borrow a bigger landing net!

“I caught it on an 8mm cube of meat down the edge over toss-potted hemp, chopped worms and meat. I used my Acolyte Carp pole with 0.23mm Supplex line to a 0.20mm hooklength and size 10 Margin Carp hook to pink 14-16 Carp Bungee.

“It’s easily my biggest ever fish on a pole. When I finally netted it, the rest of the competitors all stood up, clapped and begun shouting ‘Bravo!'”

This unusual two-day event sees 60 pairs of anglers involved. Each pair shares the same swim on one of two 30-peg lakes, which they fish simultaneously. Aaron and John managed to win their section on Day 1 with an impressive 53kg total and were 5th on Day 2 with 19.4kg. This catapulted them into 7th overall and the top-placed English pair – largely thanks to Aaron’s last-gasp giant!